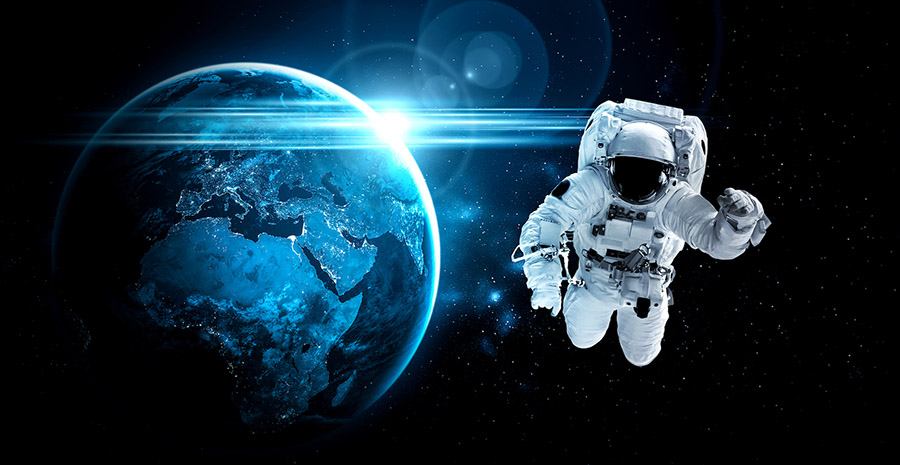 With the recent availability of consumer space flights from companies like Space-X, Amazon, and Virgin Galactic, space travel is becoming more and more popular among the rich and famous. This week, even William Shatner went outside the atmosphere for a few minutes. Perhaps the ability to leave Earth will soon be available to all of us. But be careful what you wish for because Space travel may not be as fun as advertised.  Enter microgravity….

Wait, there is gravity in space?

What astronauts experience is called microgravity. The concept of zero gravity is a misnomer–a small amount of gravity exists everywhere in Space. Gravity holds the Moon in orbit around the Earth, the Earth in orbit around the Sun, and keeps the Sun in the Milky Way. Gravity does decrease with distance, but not as fast as you might think. On the International Space Station, gravity is still at 90% of what it is on Earth; on Mars, gravity is about a third of Earth’s gravity; and the moon has about a sixth of Earth’s gravity.

Why do things float in Space then?

Gravity is still yanking on the space station, but it is actually “falling around Earth,” meaning that although gravity is pulling it down, it is also is moving at 17,500 miles per hour, a speed that matches the way the Earth’s surface curves. So, the station continues to fall as it orbits, but it never hits the ground.

When a person leaves the Earth’s atmosphere, they get to experience weightlessness. It first happens when the speed of the spacecraft moving forward into orbit cancels out the effects of the Earth’s gravity. The shifting of forces causes the passenger to enter a state of free fall, which feels like weightlessness or floating.

To put this in context for us Earth-bound folks, imagine riding on a roller coaster. As the carriage climbs up the steep track, you feel gravity push you back against your seat. But once you reach the top of the climb and begin to speed down the hill, you feel yourself hanging in the air for a second—floating—before the safety belt pulls you down the track along with the rest of the coaster.

What happens to human bodies in Microgravity?

Being in a microgravity environment can have both short-term and long-term effects. First of all, your sense of up and down goes off-line, meaning you have problems determining where the ground or ceiling is. Second, you might lose the sense of your body in space and where your body parts are relative to each other. As a result, space adaptation syndrome (SAS) or “space sickness” can result, causing nausea, dizziness, vomiting, headaches, fatigue, hallucinations, and disorientation in Space.

Data shows that about 45 percent of space travelers suffer from Space Sickness, but it rarely lasts more than three days, when the body adapts to the new environment.

Longer-term, weightlessness can cause more significant physical issues such as balance problems, visual disturbances, ‎bone loss, and damage to the heart muscle. (The longest sustained time spent in space was 438 days). Even a few days in Space can cause temporary health problems as the body re-adjusts to the Earth’s gravity.

How to Train for Weightlessness

In order to prepare astronauts, NASA and other companies use something called parabolic flight to simulate a microgravity environment. In these trainings, a plane flies into the atmosphere and then, like a roller coaster, goes up steeply at about a 45-angle from 24,000-34,000 feet. Then it dives to about 24,000 feet, giving the astronauts the feeling of weightlessness for approximately 20-25 seconds. The plane repeats this up to 15 times in a single flight giving the passengers multiple opportunities to feel the extra weight of gravity, followed by the feeling of weightlessness. These flights have been fondly nicknamed, “Vomit Comets” for obvious reasons, and are a vital part of any astronaut’s (or movie actor’s playing astronauts) training. These flights also give scientists the chance to study the effects of microgravity on people, equipment, and instruments.

The solar system outside our world is fascinating, and the possibility of Space travel is thrilling to many of us. Training and study are necessary for this and future generations as we travel to Mars and beyond. As Space travel becomes more ubiquitous, many more people may get to experience the feeling of floating above the Earth. The rest of us will have to stick with roller coasters and amusement parks for a glimpse into weightlessness.