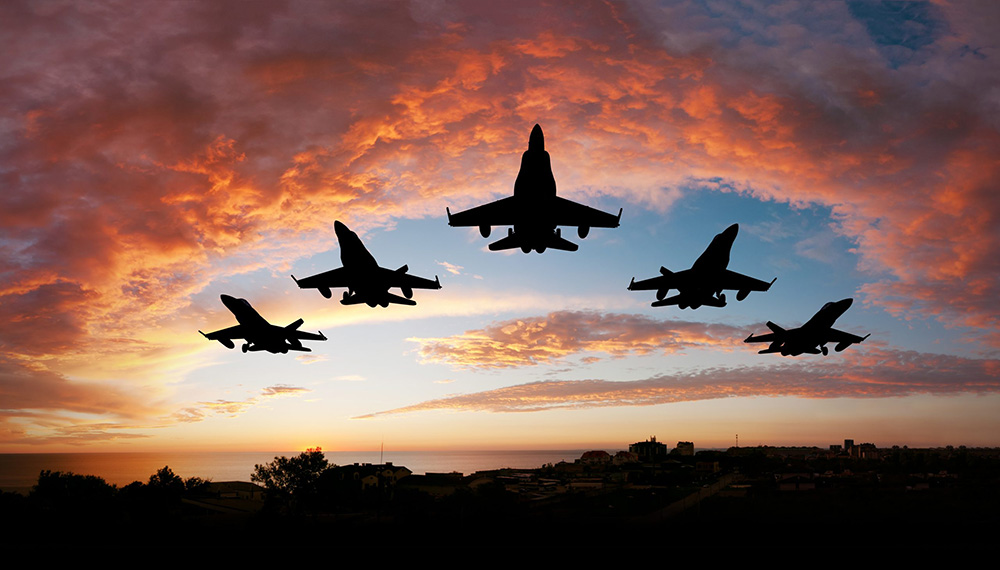 35 years after the original Top Gun movie took American viewers by storm, the sequel, Top Gun Maverick, may well gross $1B dollars…reminding us that we all love a film that involves fast planes and aging movie stars in imminent danger.

But what about the planes themselves…the miraculous machines that let people fly through the air thousands of times a day. Did you know all types of aircraft (military, commercial and private) require vacuum to manufacture and fly safely?

The many applications of vacuum in aircraft manufacturing are too numerous to name in one article, however, some highlights include assembly, heat treating, and brake production. And to fly a plane, vacuum is also key, assisting with aircraft control, engine maintenance, and landing functions.

Vacuum in the Airplane Manufacturing Process

The manufacturing of an aircraft includes a complex set of processes, requiring precision and skill. A commercial aircraft may take between 4-6 months to manufacture, a fighter jet 6-9 months, and a private jet may take up to 18 months. The airplane manufacturing industry uses a wide variety of vacuum applications in the manufacturing process such as for lifting, moving, and clamping of the plane’s parts.

Some applications of vacuum in airplane manufacturing are:

Vacuum heat treatment is used on airplane parts such as engines and exhaust parts that must be able to withstand high heat conditions and other stresses during normal flying operation.

Airplanes are composed of many different metals such as aluminum, stainless steel, tungsten, and titanium, all of which are susceptible to the effects of air (like rust or corrosion). The choice of metals, as well as the correct heat treatment on each metal, are some of the most important decisions that manufacturers make. In all cases of heat treatment, vacuum is needed. The reason for this is that the application of heat can cause metals to react with air at an accelerated rate, resulting in a layer or “skin” on the surface of the metal that is harder or softer than the rest of the metal.

So, in order to avoid this oxidation process, it is important to remove all the air with a vacuum chamber before heating the metal. The metal is then heated up as high as 2,400°F or 1316°C in this controlled environment. The amount of time needed to complete the reaction in the vacuum chamber is called “soak time” and depends on the part and the metal type. Soak time can take anywhere from three to 24 hours and is controlled by a computer to ensure repeatability and uniformity.

In addition to avoiding damage caused by air, a vacuum hardening process can also improve many properties of the metal. When metal is treated with a vacuum process, it becomes harder and more resistant to corrosion. It also has more strength, more ductility (ability to be hammered thin or stretched into wire without breaking), and more elasticity.

Airplanes use carbon brake disks for landing. These brake discs in an aircraft landing gear can withstand temperatures up to 2,000°C and absorb millions of foot-pounds of kinetic energy every time they land.  And like other airplane parts, they require vacuum at several steps in the manufacturing process. Below is a partial list of where vacuum contributes to the brake manufacturing processes.

Carbon Infiltration: After the brake disks are then cut, each disc undergoes a process known as chemical vapor deposition or infiltration (CVD or CVI), spending several months in the furnace at more than 1,000C. Multi-stage steam vacuum ejectors suck air from the furnace to achieve a soft vacuum. The combination of heat and vacuum breaks the carbon atoms out of the natural gas (methane or CH4) molecules, allowing them to infiltrate the compressed fibers.

Graphitization and Painting: Discs are machined into their final shape after undergoing graphitization, a heat treatment process that transforms the disordered carbon atom structures into three-dimensional crystals of pure graphite.

Finally, discs are then painted to reduce catalytic oxidation from contaminates like runway de-icing agents and to prevent thermal oxidation at the high temperatures they experience during a takeoff or landing.

Plane Control and Function: Vacuum plays a significant role in the functioning of commercial aircraft. In combination with other technologies, vacuums are used for extending the gear for landing, braking, steering the nose wheel, opening cargo doors, controlling the propellers, operating the load ramps, and controlling airplane wipers.

Engine Maintenance: Aircraft have high-performance engines, and having a vacuum pump in aircraft planes offers some benefits to the engine. These devices will help increase engine life and keep oil cleaner for longer. The role of a vacuum pump is to remove gas molecules from a sealed volume to leave a virtual vacuum. Then fluids rush into the vacuum because of the difference in pressure gradients.

The above is just a sample of the applications of the vacuums in the manufacturing and use of aircraft. AVAC has many vacuum product options available at competitive prices for all defense and aerospace needs.

As always, thank you for being an A-VAC customer!