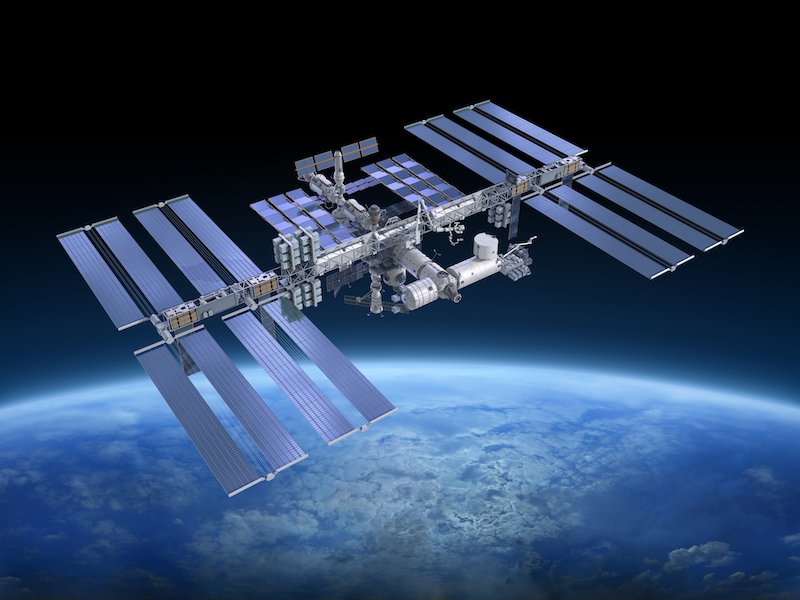 Astronauts on the International Space Station have been celebrating Christmas and the winter holidays each year since 2000. Eating in space has its own special set of challenges due to the low gravity environment.

Preparing Meals in Space
The majority of the food sent up to the space station has been dehydrated and vacuum-packed for travel. Onboard the space station, astronauts have both a food rehydrator which uses the left-over water from the station's fuel cells and an oven to heat food to the proper temperature for eating.
Astronauts can enjoy a variety of meals including everything from chicken and vegetables to fruit, desserts, and candy. They drink coffee, tea, orange juice, punch and lemonade (but no alcohol for obvious reasons.) They look forward to receiving new supplies which usually include fresh fruits and vegetables, treats and ice cream.
Food is kept in individual pouches which can then be rehydrated and heated at each meal. Node 1 of the station connects the Russian section to the American section and serves as the kitchen and dining area, where the most important kitchen tool is scissors for opening up the re-hydrated packets of food.
Since plates are not necessary, (they'd just float away), astronauts use a lot of tortillas. Food can be spread on the tortilla, which won't create crumbs like wheat bread or other foods that can float away.

Eating and Appetite
Although there is plenty of food to choose from, eating in space is not as enjoyable as on Earth for a couple of reasons involving smells.  Without gravity, the delicious aromas of hot foods float away and are much reduced when they reach the astronauts' noses.
Second, the astronauts tend to collect fluid in the upper parts of their body so they have consistently stuffed-up sinuses. As we all know, food tastes bland and boring when we have a cold. To spice things up, astronauts like to add extra condiments such as ketchup, mustard, salt, and pepper. Interestingly though, salt and pepper need to be suspended in liquid so they don't float away and clog the equipment.

The Christmas Meal
With both Americans and Russians on board, the Christmas meal is a multi-cultural event. Christmas food is more typically American—turkey, green beans, sweet potatoes, and cornbread. The Russians contribute as well though, adding some variations to the mashed potatoes and cranberry sauce.
Last year in 2018, the astronauts received a surprise Christmas meal from Elon Musk's Space X Dragon which sent up smoked turkey, a green bean casserole, candied yams, cranberry sauce, and fruitcake. And this year, Space X Falcon is in the process of launching another load of experiments and Christmas presents, details of which are under wraps until Santa's sleigh arrives.

New Tests in Space Cooking
Last month, NASA sent to space the first proper oven, designed to cook foods (rather than just reheat them) in a zero-gravity environment. The food they shipped...chocolate chip cookies! Provided the oven works properly, astronauts can cook one cookie at a time. The special oven was created to handle some of the issues of cooking in space. One is keeping the food in place, and another is figuring out how to heat them without the typical properties of an oven on Earth where hot air rises due to gravity. Whether or not they eat the cookies depends on the outcome of the baking.
Although eating on the Space Station is not as enjoyable as eating on Earth, the astronauts do what they can to eat well. And all in the service of science.
A-VAC Industries, Inc. Is Proud To Be A Veteran Owned Business Since 1969
Member of American Vacuum Society (AVS), Society of Vacuum Coaters (SVC). Association of Vacuum Equipment Manufacturers (AVEM)