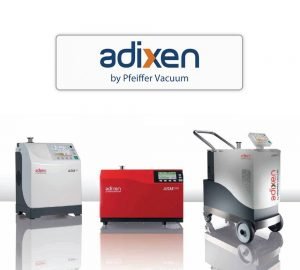 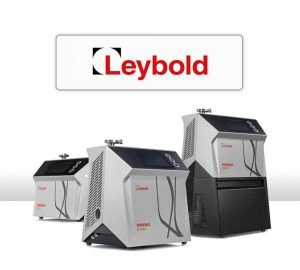 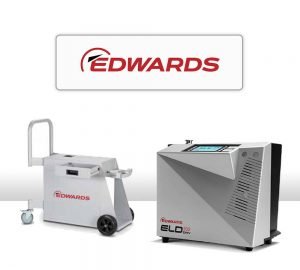 Design of a Helium Leak Detector

As an extension in the method of detecting trapless helium leaks, counterflow helium leak detectors have a blueprint that is in perfect accordance with the schematic diagram displayed in the below figure. The mass spectrometer (entitled MS in the diagram below) is mounted on the flange of the turbomolecular pump that is meant for intake. Another pump ( Sv ), is used to evacuate the turbomolecular pump via the valve marked as V2. 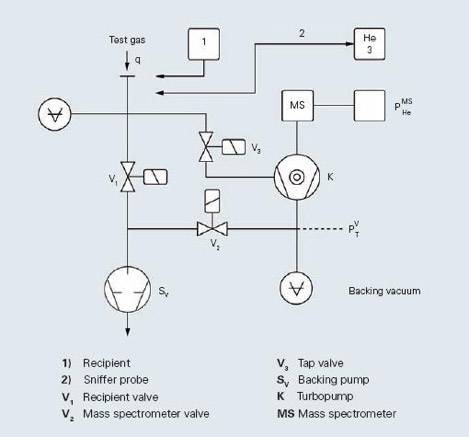 The workpiece marked 1 in the diagram is evacuated via the open valve (V1) that is present in the connection of the test gas. The two valves, V1 and V2 are interconnected in a manner so as to prioritise the building of vacuum pressure in the turbo pump over the evacuation of workpiece 1. Once it has been evacuated, it is safe to reconnect it to a backing pump, or a tap that is present in the turbomolecular pump by using the valve that has been marked as V3. Once the optimum pressure levels have been attained, helium can be sprayed externally onto the workpiece, which, in combination with ambient air, penetrates the leaks of the workpiece. The helium that is present in the residual gas circulates in a direction that counters the directional flow within the two valves, and travels via the turbopump, to finally reach the mass spectrometer (MS), where the leak is ultimately detected. The turbopump has separate compression ratios for air and helium, and the mutual difference varies by multiple powers of ten. The turbopump, with its high compression-ratio helps to deviate air from the mass spectrometer, while the helium gas is partially pressurized. The pump thus functions to selectively amplify helium. This is how the mass spectrometer facilitates the detection of helium leaks in workpieces that have pressures lower than 1 mbar. Helium gas can be pressurized at differing powers of ten, and leakage rates ranging between 10 and 10-8 mbar l / s can be detected by using various taps that are located at different places on the turbopump (V3), and also by operating it at varying speeds that can exponentially influence the overall compression ratio. It is necessary to attain a pressure in the range of 10-3 mbar to help the detector to achieve the highest point of sensitivity and effectiveness. This can be done by using the inlet V3. The mass spectrometer generally operates at extremely low pressure levels owing to the upstream pressure of the turbopump. This provides adequate protection to the detector from all risks of damage or contamination.
A-VAC Industries, Inc. Is Proud To Be A Veteran Owned Business Since 1969
Member of American Vacuum Society (AVS), Society of Vacuum Coaters (SVC). Association of Vacuum Equipment Manufacturers (AVEM)

Scroll back to top Do NOT follow this link or you will be banned from the site!